’twas a dark and stormy night…

Actually, it was around 9am on a Thursday, and I have no idea what the weather was like. But it might as well have been a dark, stormy night because I was born with a dark heart and a darker soul.

Even my parents and two, sweet, wonderful brothers!

Just recently, I heard a story about a professor at a Bible College somewhere in Dubuque, Iowa. Apparently, anytime that he is around a newborn baby he will fight his way through the coo-ing, clucking masses and gaze quietly at the child for a minute or two before saying:

Oooo, what a dirty, rotten little sinner you are!

Needless to say, he bears more scars than your average Bible College professor. I assume he does, anyway – I’ve never counted the scars on any Bible College professor, but I’m sure at least some US Taxpayer’s money has been put to good use and there is a detailed report on this very issue filed away by the NSA.

We are all spiritually dead when we are born. Now, if this was a theology section of my blog, I might start talking about how all babies and young children that sadly die before the age of accountability and awareness of their ability to choose between right and wrong and perhaps before they have consciously rejected God for the first time will probably go to heaven when they die. But it isn’t, so I won’t.

(It’s OK if you didn’t understand that sentence. I actually did sneak in some theology, and that is supposed to be written in convoluted, run on sentences. Just ask St. Paul or J N Darby.)

Instead, I will start telling the story of my life.

So there I was. Impossibly cute, and the third son of three to a first son of three. My Mother has no siblings.

There were no more children after me. Well, my parents didn’t have any more anyway. I assume other families continued the process, but one look at me told my parents that their quiver was full. I stubbornly stick to the story that they knew they couldn’t improve on perfection, but fewer and fewer people seem to buy it.

I was a very cute baby, though. Here’s a picture to prove it (assuming I can work out how to insert one inside a blog – first time I’ve tried this, so stand back…) 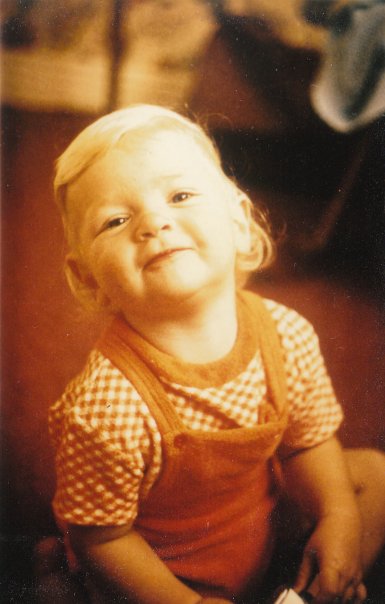 Me as a baby

That’s probably enough for the first post in this corner of my blog, don’t you think?

Don’t be fooled, though….

Filed under It's Not About Me

The blood of Christ set you free from an empty way of life. That way of life was handed down to you by your own people long ago. You know that you were not bought with things that can pass away, like silver or gold. Instead, you were bought by the priceless blood of Christ. He is a perfect lamb. He doesn’t have any flaws at all. He was chosen before God created the world. But he came into the world in these last days for you. Because of what Christ has done, you believe in God. It was God who raised him from the dead. And it was God who gave him glory. So your faith and hope are in God. You have made yourselves pure by obeying the truth. So you have an honest and true love for your brothers and sisters. Love each other deeply, from the heart.

Gruesome, isn’t it? “The blood of Christ…” How could anyone really believe that God Himself became like His creation and willingly sacrificed His life in order to set us free? Barbaric.

We do it all the time. I’ve never given blood (I can’t, here in America at least) but 3% of Americans do so on a regular basis, and I’m pretty sure that a far higher percentage than that doesn’t have any problem with this process at all. And thousands of times each day (nearly 5 million people per year) donated blood is used to save lives via blood transfusions. Of course, people who donate blood aren’t asked to give it all, because if they did – they’d die.

There are many complications when it comes to donating and receiving blood. Many people have health or other concerns that preclude them from being a blood donor. I, for example, cannot donate because I lived much of my life in England, and the American authorities believe that I may have been exposed to Mad Cow Disease. Kind of a moo-t point, I suppose. And then it has to be said that immoral, promiscuous and otherwise dangerous lifestyles have resulted in an alarming percentage of the population whose blood is basically toxic. Mother to baby – the tainted blood flows. Children pay the price for the sins of their parents.

The way we live – the choices we make – impact us even to the level of tainting our very blood, and the blood of our children.

We all need a life-saving blood transfusion.

Just as I am,–without one plea
But that Thy blood was shed for me,
And that Thou bidd’st me come to Thee,
O Lamb of God, I come…

So why is this concept so horrific to many people? All this talk by Christians of blood, sacrifice, death and lambs…

The first misconception to clear up is that the Bible (and therefore God) teaches us to use and abuse animals however we want. It doesn’t. Instead, our ancestors were instructed to rule over the Earth and all the non-human life on it. And remember who is telling us this: God, who is a perfect, just and righteous King and wanted humans to follow His lead!

We didn’t, and everything got (very) quickly (very) screwed up.

The first death mentioned in the Bible is Adam and Eve’s spiritual death. The instant they disobeyed God, their spirits were ‘disconnected’ from the source of spiritual life. This was very quickly followed by the first physical death – and I don’t mean Abel…

The Lord God made clothes out of animal skins for Adam and his wife to wear.

The fact that we are all born spiritually dead means that have to wear clothes in public. One of the endless consequences of spiritual death is lust. One of the most sickening signs of how desperately sick this sick world has become is that families are now getting into serious trouble for sending photos of their naked babies or young children to the developers. We are so overwhelmed with pornography that it hardly makes sense anymore to thing that such photos could be completely innocent. Of course, who uses film anymore? We now have the instant gratification of digital cameras and cell phones…

We are sick, sick, sick. And God knew exactly what was going to happen, so He took the freshly created life of an animal and killed it to make clothing with its skin.  And WE are to blame. Not God.

God knows what we need to give us even a slender chance of remaining physically faithful. But of course all we did was take this gift of modesty, and turn it into a) legalism, or b) a striptease opportunity.

So the animals died by the millions throughout the Old Testament. Sacrificed because of OUR sinfulness, not theirs. Animals don’t have spirits – they cannot sin. Animals do have souls, and there will be animals in heaven, but that’s a blog post for another day!

But these animal sacrifices were never going to get to the root of the human problem. They couldn’t. In order to pay the price for humanity’s spiritual disobedience, a human sacrifice would be needed. A perfect human sacrifice.

Before anyone gets all weirded out again by this, don’t forget that humans make the ultimate sacrifice all the time. Fathers giving their lives trying to save their drowning children… Police Officers taking bullets intended for someone else…. Unborn babies giving their lives for the ‘rights’ of their mothers….

So, after our incredibly patient Creator gave His creation generation after generation to prove that it could never become perfect under its own steam, He sent His Son to be perfect on our behalf.

One of the many names the Bible gives us for God’s Son is ‘The Lamb’. The imagery is simple. Innocent, pure, and born to die.

And He died. Willingly. In your place. His perfect life’s perfect blood all given so that you can receive the life-saving spiritual ‘blood transfusion’ that you need.

It was, is and always will be the only Way to regain the Life that God wants us all to have.

So – you’ve now read the truth. What are you going to do about it?

And if you’ve already accepted the Truth and obeyed it (two different things, perhaps?…) – what are you going to do next?